Our nation is polarized. We seem to be unable to agree on anything. However, the recent riots and violence at the Capitol revealed something on which all of us do agree, i.e., in the greatest country on earth, democracy is what we as Americans deeply treasure. 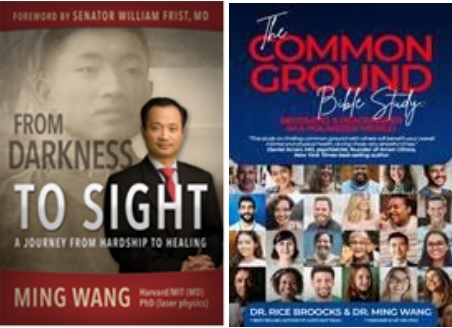 Nations from around the world look to America for inspiration. We have shown that it is indeed possible to build a society based on equality and respect. No one is above the law.

As I described in my autobiography, From Darkness to Sight (which is being made into a film “Sight”), I grew up during one of the darkest eras in China’s history. When I was 14, I was taken out of school and was threatened with deportation to labor camps for life, a devastating fate that fell upon millions of youth at that time. When I arrived in America in 1982 with only $50, a student visa and a Chinese-English dictionary, I fell in love with this country because of its freedom.

As soon as I set foot in America, I began to ask myself, “why here?”. How can freedom and liberty flourish here for over 200 years, yet these same ideas still have not taken root in so many parts of the world even today?

Friends told me that it is because of what was accomplished by America’s initial group of enlightened leaders. However, throughout human history when an idea is advocated only by a small group of leaders without the support of the people, it often fails.

Still others argued that it is because America has had great presidents. However, we all know that the reason no American president has ever tried to change the Constitution in order to stay in power is that the American people simply would not tolerate tyranny.

So, after being in this country for nearly 40 years (longer than my own country of origin), I believe I may have finally found the answer to “why here?”. The reason that freedom, liberty and democracy were able to take root in this special land, even though the same ideas have failed in so many other parts of the world, is because of our political system, our Constitution and our innate, deep respect for the ideals of democracy. It is these ideals that our soldiers have fought for with their lives, and that members of the non-profit “917 Society” have embraced as we put the Constitution into the hands of 8th graders, reminding future generations of Americans that democracy is the essence of America.

At this moment of crisis, no matter what our race, ethnicity, cultural background, religion or political view, we all share common ground in our love for this country, our deep respect for the U.S. Constitution and the democratic system of America, the greatest nation on this planet.

As a teenager, Ming fought valiantly to escape from being deported to remote areas to face a life sentence of hard labor and poverty. He came to America with only $50 and earned two doctorate degrees, one in laser physics and one in medicine, and graduated with the highest honors from Harvard Medical School and MIT.

Dr. Wang has published 10 ophthalmology textbooks, over 100 scientific papers--including one in the world-renowned journal “Nature”--and performed the world’s first laser artificial cornea implantation. He has performed well over 55,000 procedures including on over 4,000 doctors.

Wang Foundation for Sight Restoration has helped patients from over 40 states in the U.S. and 55 countries worldwide, with all sight restoration surgeries performed free-of-charge. Dr. Wang was named the Kiwanis Nashvillian of the Year for his lifelong dedication to helping blind, orphaned children from around the world.

Dr. Wang’s autobiography, “From Darkness to Sight,” is currently being made into a movie.

Dr. Ming Wang, MD, PhD can be reached by email: This email address is being protected from spambots. You need JavaScript enabled to view it., or on his website: www.drmingwang.com. He is a co-founder of the 501c(3) non-profit Common Ground Network (www.commonground.network), which is currently publishing Common Ground Bible Study, the first book of its kind about the concept of common ground for Christians.